#Introduction
In this Article, we will be discussing ClickFunnels versus LeadPages. It will be unfair to compare both platforms on a feature to feature basis. But at the other hand, we will be comparing their outcome. After all it, it all comes down to the outcome of each platform (i.e. sales, conversions, revenue and income that can be generated).

#What Is LeadPages?
It’s mainly a lead acquisition tool built to help you get more leads, that’s the most straightforward description I can think of. It can help you get leads in but really won’t take you farther than that.

LeadPages was built in a less competitive era. An era in which having “prettier” landing page was sufficient to get you customers through the door. But since then it really never evolved to respond to market demands. Ad networks (Facebook Ads & Adwords as an example) are becoming more and more competitive these days, Traffic generation becoming trickier and more expensive every day. Making it literally harder to get cheaper clicks and leads as in the old days.

If you’ve ever tried to promote something online (product, service or your local business) you must have had noticed that the cost per conversion can easily go up like crazy. Making it non-sense to keep paying 10$-20$ to get a lead through one of your landing pages.

Clickfunnels, on the other hand, is a newer platform. but yet it’s taking the market by storm, and taking over LeadPages market share. This tool is basically focused on making you more money, that’s it.

It’s All about making more money per each lead, thus affording to pay those high costs per conversion prices from Ad networks and other quality traffic sources.

Optimizing your leads opt-in rate, purchase conversion rate and even managing membership areas it’s all included within a hybrid platform, while it’s very easy and straightforward to use. I personally was shocked at how easy it was to use, even though it has all these features, and abilities. That are quite missing on all other platforms.

I got first introduced to Clickfunnels through Russell Brunson’s book (DotCom Secrets: The Underground Playbook for Growing Your Company Online), If you haven’t got your copy yet, I highly suggest that you do, It will change your entire life. At the time I’m writing this wiki article, the book is given for free, just cover shipping and they’ll send it to your doorstep.

#Pricing Structure
Somehow whenever I’m checking a new software or a service, I first check their pricing page before checking anything else. So let’s discuss the pricing in depth here.

LeadPages entry price might look “cheaper” at the first instance, compared to ClickFunnels’ but in reality the former’s Standard & Pro plans are all limited in terms of the features they are offering which might end up being a roadblock. 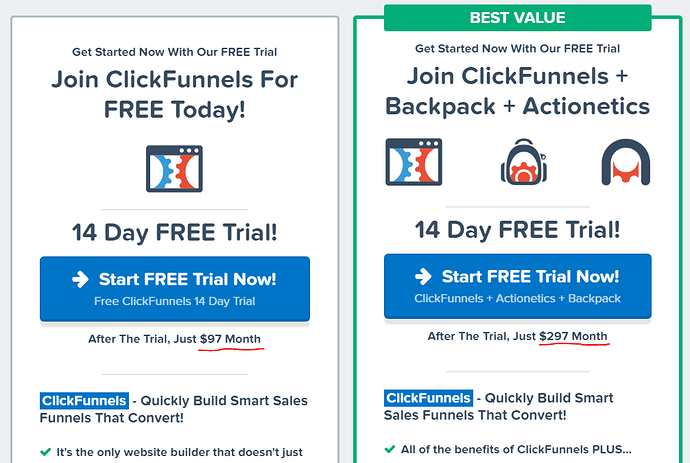 It has quite more plans than you can see above. But the majority of their customized plans are “hidden” (I never managed to figure out why :o especially that those plans have so much value than the current ones, maybe they want people to buy the Etison full suite and invest more!). You may just ask their support staff to sign you up to one of their unpromoted packages.
These are the two other “hidden” plans that I know about:

I personally think you should already cross the 1 million $ barrier (per funnel) before ever thinking of using this plan, yet you won’t need it unless you need to manage more domains and SMTP accounts within the same Clickfunnels Account.

For years with every single landing pages builder the question has been “How Can I Get More Leads or Conversions Cheaper?”, Well Clickfunnels has proven that kind of questioning is completely wrong, and instead, the whole thing is now circling around generating more income per each lead/conversion no matter what the cost per lead was. Thus; you can afford paying even more for each quality lead without being afraid of not breaking even, or not making enough profit.

That’s also known as The Value Ladder, as introduced by Russell Brunson (Founder of Clickfunnels) on his free book DotCom Secrets: 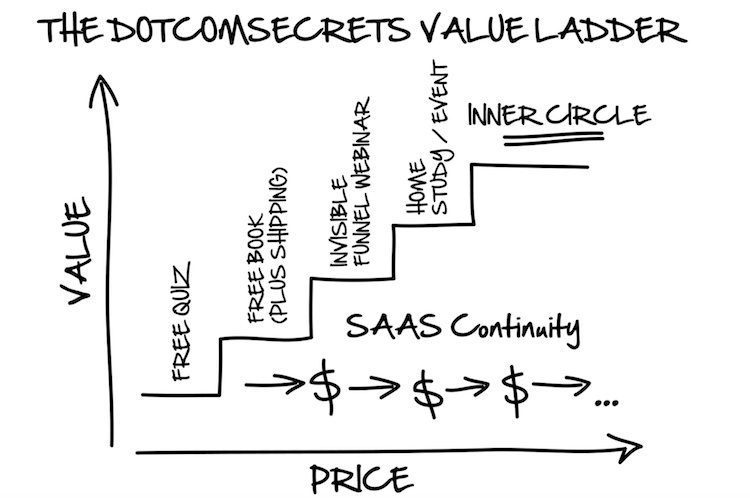 After all, you should be wondering how the heck, is he giving a free physical copy of his book for free without breaking his bank account. The answer would be through the use of “The Value Ladder”.

The value ladder concept is mainly built around giving something free or exciting enough to the user, something your competition can’t afford giving. And in return you’ll get them into a Sales Funnels, that is specifically designed to upsell/down sell them more stuff.

The cool thing about value ladder, is it can be implemented in every single business model, whether you are a local business, B2B business, selling Boeing airplanes or selling hamburgers, it doesn’t really matter as the concept stays the same.

Example:
So let’s take a local dentist for an instance, in order to implement the value ladder a dentist can probably offer some free voucher, discount or even free teeth cleaning. and as a first upsell, the dentist then can offer something of lower price but of good value next, and later on that sample free teeth cleaning offer can end up by signing up an entire family to a yearly subscription program.

#Why ClickFunnels, Not LeadPages?
You might be wondering, why not say (Why LeadPages, Not ClickFunnels?) well, the answer is so simple. LeadPages has been on the market, in fact, it took over the market for ages now, and Clickfunnels has been released only couple years ago. Thus; It’s a fair question to ask why should people think of using ClickFunnels instead of the outdated LeadPages.

First of all, as discussed in the very beginning of this article, by now you’ll probably notice that ClickFunnels is approaching the marketing, landing pages, and sales automation thing from a whole new perspective. With LeadPages as with all other landing page builders, It’s all about building a “pretty” landing page, and keep paying for it on a monthly basis! (which you can absolutely hire a freelancer to do the same job, once and for probably less than the monthly cost of those platforms), And then it’s really up to you to do whatever you want with the leads (that’s if any leads were generated in the first place).

As for ClickFunnels, it’s a whole new game. Making Sales And Conversions. Clickfunnels, Is focused most on getting you more sales and conversions at the lowest cost, thus increasing your overall ROI. And that really explains why most small businesses tend to go for the CF approach rather than a landing page one.

As I’ve mentioned above, maybe pricing wouldn’t be the best comparison approach, as we’ve seen both platforms tend to have limitations that vary depending on the pricing picked. which makes it illogical to compare the both. But when seen from a pure business perspective then ClickFunnels has the upper hand for sure. For businesses, it’s all about ROI nothing else, And with ClickFunnels you can really make sure that you are making the best ROI possible for your business. Never to mention that there are currently businesses pulling some really “imaginary” numbers, I wouldn’t ever think would be possible like 2000% ROI, through combining the power of ClickFunnels with Facebook Ads.

That’s it for this article, you might contribute to the editing of this article, by enriching it with details and info. And join the discussion with like-minded funnel-aholics

First of all really nice stuff, full of details, I was just wondering how did you know about those “hidden” plans?!!

a. The Professional Plan

b. The Enterprise Plan

How can I register to anyone of them? as I have Backpack as well, and I never use it at all. so would really love to get rid of that extra 100$ per month.

Yes, I simply asked support team and they told me about it

Those two packages (Professional and Enterprise Plans) Are NOT promoted by them but still available.
The process to get them though is a bit manual:

I personally have mixed feelings about LeadPages, so far been using it for about a full year. And I can’t really say that I see it any different from any other auto-responder such as (Aweber, SendLane…etc).

Concerning Clickfunnels, I really find the concept you mentioned really interesting, after all, I am all after a good ROI, and using LeadPages, I’ve managed to get Leads but that’s the end of the story. I am not really sure what to do with them afterward. So will give Clickfunnels a try for couple weeks and see where it leads

Thanks for sharing,
Alex

I know you’ve ignored comparing both platforms, features to prices.
I mean apparently LeadPages, is almost 50% less expensive than ClickFunnels. So why would I go for ClickFunnels rather than LeadPages!

In the Article, you’ve clearly specified that you are not comparing the features but instead the outcome, and I really respect that approach all the other reviews I’ve read about the same subject tend to just compare a feature to feature. While yours is more generalized and focused on the outcome. Can you please tell me in short, what makes ClickFunnels different than LeadPages or any other landing pages builder. Especially that the outcome of each is most likely dependent on the skillset of the user itself?

Yes, That’s correct. The outcome of any tool or software is dependent on the skill set of the user itself (to a certain point) unless the tool itself is easier to use compared to the other, that’s one of the points I’ve mentioned in the article.
ClickFunnels generally tends to be easier to use, but comparing Clickfunnels and LeadPages using that approach is just more like comparing apples and oranges, it makes absolute no sense.
Let me put it another way, (from a user’s perspective):

Hope that explains it, It’s more dependent on your intention from using the tool.