I noticed that the currency converter only works on Order Form pages, specifically with the product selector element.

It does not work with:

Hoping you can improve the functionality based on the points i made above?

Second, I am using a 3rd party script from CF Pro Tools called Funnel Total Tracker, which fires the purchase & purchase value data on both Order form & OTOs successfully. It uses the order summary price on the order form to send through the correct purchase value to FB.

I’m worried that when you guys do fix the currency converter app to work on the order summary element, that it will affect the FB reporting (i.e the price of $39.95 is converted to GBP 30.95. It will send the amount of $30.95 to my FB reporting instead of $39.95).

Any suggestions or thoughts on this?

Have been trying to find a currency converter CF solution for so long, so i could target more countries worldwide like shopify dropshippers do. But they either did not exist or were too expensive to get created.

So glad Funnelish is providing a solution!

The product selector element is actually in the checkout I guess you mean the order summary which indeed is not covered by Currency Converter, however, that is a known limitation and should be addressed in an upcoming update.

That’s also something we are aware of, sadly this one will be harder and limited (for less common currencies) we were considering getting this done through the Programmable app (which can do similar things dynamically) but it might also be included in the currency converter app.

I’m worried that when you guys do fix the currency converter app to work on the order summary element, that it will affect the FB reporting (i.e the price of $39.95 is converted to GBP 30.95. It will send the amount of $30.95 to my FB reporting instead of $39.95).

Is there any specific reason for not using the Facebook Pixel app which is way more accurate as I am sure not all your customers will land/see the thank you page, especially if you have a long funnel with lots of upsells and downsells.

By the way, both of the features mentioned in your post @chrisaguilera are being beta tested now and it’s just a matter of few touches here and there to make sure they are not breaking any other features on other apps then it can be rolled out to everyone to use.

PS. I’ll be updating this thread once there is an update.

Happy to let you know that our team has rolled out the updates doing exactly what you requested on your post above, we’ve added two new options to the Smart Currency Converter app:

1. Auto-localize prices on your entire funnel?

This allows you to automatically detect and convert prices throughout all your funnel steps, wherever a price is mentioned it will be converted to the local currency whenever possible.

2. Show a currency popup on your entire funnel?

This option will show a tiny popup on all your funnel steps allowing your customers to change their local currency if they wish to. It looks something like this:

This popup style might be improved/changed on upcoming updates.

You can find those options and others under the Your funnel > Funnel apps in Funnelish.

We hope that was helpful, we’d appreciate if you can provide any feedback on your experience with the above features, that will help us improve the app further.

Check the docs on how to use the smart currency converter app.

Is there any specific reason for not using the Facebook Pixel app which is way more accurate as I am sure not all your customers will land/see the thank you page, especially if you have a long funnel with lots of upsells and downsells.

Since i’ve just signed up for Funnelish, I’m not in a rush to install every app right away. In fact the main reason i’ve signed up is for the currency converter. The CF Pro Tools script i’ve been using for the past few months actually works great. It tracks each purchase through the funnel, even if they don’t make it to the thank you page. Why waste time trying to fix something that’s not broken, ya know? (plus it would add another thing to worry about installing and hoping it doesn’t break). But now, i think i’m going to have to test out your FB pixel app, because from my recent tests, the CF pro tools script isn’t compatible with the currency converter, at-least for the front end product. It also doesn’t seem to pull the purchase data from the order summary total via Fancify.

Anyway, that’s so great to hear your team has already released an update for the currency converter! It is very very appreciated.

I went ahead and did initial tests the other day with the new update and here are some problems I spotted (it is still unusable to me ATM, almost there though!):

Hope that was insightful and i look forward to testing it out more. Hoping to implement it into my live funnel soon!

That’s not right, all our apps are independent from one another, meaning you can use each to their full capabilities without having to enable another app as well…

For the Facebook Pixel app questions, I recommend starting a new topic to avoid this one going off-context.

As for the bugs you’ve described, it will be appreciated if you can provide some URL where we can see the issue in action in order for us to be able to escalate it and get it resolved

That’s not right, all our apps are independent from one another, meaning you can use each to their full capabilities without having to enable another app as well…

Right, sorry i did not give enough context. For my situation, I use CF Pro Tools order summary script (which is similar to the order total feature in Fancify).

To properly track purchases w/ it’s value along each step of the funnel, I’ve been using CFPT FB Funnel Total Tracker script. This script requires the implementation of the CFPT order summary script in order for it to work.

My problem is that after installing your currency converter, i’ve learned that it doesn’t work properly with the CFPT order summary. It only works (or is going to work) with Fancify’s order total feature.

Which leads me to why I say, I’m going to need to implement Fancify + FB Pixel App if I want to use your currency converter… does that make sense?

So if I want my live funnel to use Funnelish’s currency converter app + retain the features it already has… it looks like i need to replace CFPT FB Funnel Tracker with your FB Pixel App to track purchases dynamically and replace CFPT order summary script with Fancify’s order total feature.

By the way, i sent a private message to the support chat with a link to the currency converter bug i’ve described in my previous reply. Thanks!

Some other bugs i’ve found: 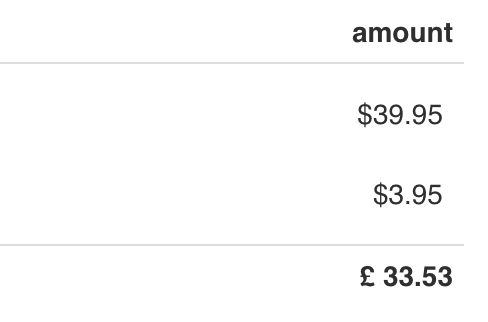 Do give it a try and see how it looks

I’m currently doing some additional testing for it and it should be good to go on my live funnel soon.

However, I noticed that this is still a problem, which i mentioned on the first post of this forum discussion: “When i had 1/2 of your new options toggled on (i.e Auto-localize prices on your entire funnel: ON, Show a currency popup on your entire funnel: OFF), it does not convert the currency, rather it replaces the prices with the tags (i.e {{currency}} ) — i solved this problem by toggling both ON.”

okay, new problem i just noticed with regards to the currency converter and its effect on product prices.

I realized that when the currency converter is toggled on, the price of my LAST product seems to use the price of the ORDER BUMP.

However, when I choose the Size 10 Sneaker, the order summary reports the correct price of $39.95. So it looks like it is just messing with the product selector price.

I made sure to isolate the problem by deactivating the other apps one by one. In this case i turned off Fancify. Problem persisted. Turned of currency converter. Problem went away.

So it’s definitely the Currency Converter App that’s causing it.

any updates or improvements to this last bug? It’s been awhile…

I wonder what’s going on in the backend of this company. It seems like the customer and technical support has gone really down hill.

I signed up with this app over two months to use their currency converter feature, along with 2 other apps.

Until this day, i still have not used any of the actual applications, because the currency converter feature seems to break 1 other app (Fancify). And the FB pixel app setup has been awful, inaccurate, and unreliable through my experience in setting up in a test funnel. It makes me not want to set it up on my live funnel at all because of the bugs i experienced in my test funnel… it definitely wasn’t a ’hassle-free’ as advertised.

anyway back to this problem. on August 27th (1.25 months ago), i reported a bug. No reply or reports on it being fixed. 17 DAYS LATER , i inquire about it again on the forum. i also private message Yassine about the problem.

What gets worse is that Yassine replies back a day later: ‘Can you remind me about the issue again? as far as I remember all the issues that were reported were fixed’…. he didn’t even realize there was a BUG?! (which again, was mentioned in the forum).

On Sept 16th Yassine then tells me: “we will get that checked asap and will be following up as soon as I got an update on this”

2 weeks later, no update. So i reach out to him again on Sept 29th. He sees my message, no reply for 6 Days…

only now, the reply is not from him. It’s from a virtual assistant: “The previous existing bug was fixed. Now I am not really sure if you mean the same or if you are experiencing a new one”

i dont even think she knows what’s going on. Because No… this simple bug is not fixed 1 month later. And to this day, i have not been able to use any of the apps.

Wish i could get a refund for paying an app i can’t even use.

Hello @chrisaguilera sorry for the long wait, we did reply on our chat channel and we are currently looking into the issue you’ve mentioned as well

well yeah Yassine, you’ve replied on your chat channel only because i’ve had to reach out multiple times.

Even when i did report the problem in the chat to make you aware of the problem on SEPT 14th.

i’m not doing this to give bad reviews. I’m doing this so your team is forced to do better for your customers.

That’s totally understandable, I guess the mess up happened due to us marking the issue as resolved on our Jira after your follow up post and another agent found it thought it’s resolved already, there was some kind of miss-coordination from our part but we are making sure it won’t happen again,

Thanks Yassine. Just tested the currency converter app and all looks good now. Am going to try to roll it out to my live funnels now, fingers crossed.

For the record (for any reading this thread). The Funnelish Team was very fair in issuing refunds for the last two months payments due to me not being able to use the platform because of bugs outside of my control.

So that customer service gesture is very much appreciated.